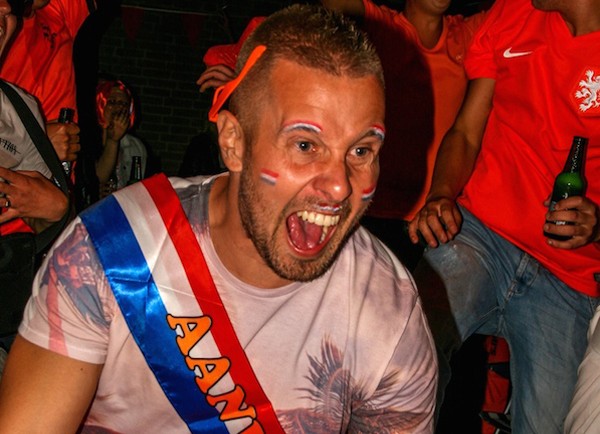 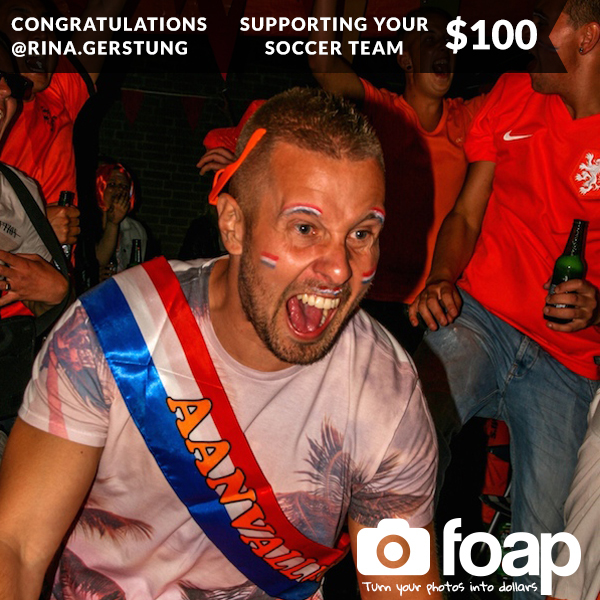 Are you a soccer fan? Did you follow the World Cup in Brazil?

Lots of Foapers did. They also challenged themselves in capturing special moments and emotions  shown by supporters and fans.

Now we have the pleasure to present you to Rina Gerstung from Holland (@rina.gerstung), whose photo was rewarded in the “Supporting your Soccer Team” mission with $100.

Hi Rina! What an amazing photo! Can you tell us something about this day and the game you were watching? Which team was Holland meeting?

Holland was meeting Spain in Brazil, it was the first game Holland was playing during the World Cup. We were invited to come over at my In-laws who put  at TV outside and benches for the people and friends in the street. We call them the “Geerweg Gang” .

Both me and my boyfriend are photographing for a hobby, we did it before so we thought it would be fun again. I noticed that taking pictures of peoples’ expression interested me more than the rest. And from the start I knew that Rich, the guy in the photo, had something  which would make my pictures say more than words.

I took a couple of photos of Rich and I knew that this would be the winning photo, I was sure about it 🙂

What happens at the moment you took the photo? Did Holland really score a goal? Did you see the goal, by the way? I’m mean you seem to be busy taking photos? 😉

LoL we haven’t seen much of the game, I was more focusing on the moment that a goal was coming so I could be ready to capture that moment of real emotion. I tried to follow it, but I was more interested in capturing reactions. I am not sure which goal it was, but it was a real one. He and a lot of other people were going trough the roof, it was a nuthouse here they almost tear the place down of so much happiness.

So who is Rich? A friend? Are you going to split the reward? 😉

Yes, Rich is a friend of my In-laws, we see them if there is a party here in the street or something like a new year party.

Hmm… I am going to surprise him with a bottle of his favorite drink, the reward I will put aside for a photo course I want to take.

Rich is showing real feelings. This image could be used by lots of sport brands, the Dutch Football Federation or let’s maybe a beer brand. Do you think this situation could be arranged in a studio or would you rather say that this is a really real life shot and that this is impossible to “fake”?

Wow, I’d say that this photo is one shot in a lifetime. It shows so much emotion, real happiness, ecstasy. He lost  the expression just after the goal. I don’t think this could be done a second time. Or maybe, but I guess then that you would see the difference between posing and a sneaky shot without the person (or the model) knows you are capturing this special moment.

Congratulations Rina for the mission and for the third place that Holland reached in the World Cup!