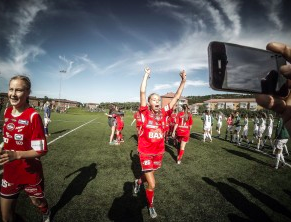 We asked the winner of the Gothia Cup Mission, user lindwert, to tell us about the photo. And he asked his daughter – one of the girls in the photo – to write about that day. This is a story from Victoria.

Duuut, duuuu, duut, dut. It´s 5.15 in the morning when the alarm sounds. I force myself to sit up scared of the risk falling asleep again. Already starting to feel the butterflies, I can hear how the others are slowly starting to wake up. That not-so fresh smell of sweaty soccer shoes really gets to me. It´s Thursday morning, in two hours and 40 minutes we start our attempt to reach the finals in Gothia Cup 2013.

Time seems to go so slow since we woke up, having eaten breakfast and now finally making our way to the tramcar at Grimbos soccer facility. It’s a warm and beautiful summerday. Almost too hot to play soccer. The soccer pitch is in front of us. The playing field is artificial grass and the turf looks great. The goals look pretty worn but the nets are brand new. Having the wind in our direction is one of the details that can be important to keep in mind. The warming up feels slower than ever, but finally it’s time for kickoff. The first half just dissapears and we have the game under control leading 1-0. But we start to do some mistakes and suddenly the game turns against us. The opponents manage to level the score 1-1. Feeling more and more under pressure not being able to score the referee blows the final whistle. That means time for penalties.

I’m not one of those five chosen to do the first penalty kicks. And I must say that I’m thankful for that. I notice that the others are very nervous, as we have never actually won on penalties before. But I’m actually not that nervous. I guess I’m pretty used to it now. We score on our first three penalties and the opponents miss two of theirs(3-1). It starts to feel like we can win this! But then it happens, they score the next two penalty kicks and we miss ours(3-3). Does this means that one new player from each team need to do one penalty kick. The opponents fail on their first attempt. But who of us in FKIK will shoot the next penalty? The crucial one. I can see that no one steps forward and it goes silent and then I just do it. Without thinking walking the long route from the middle of the pitch to the penalty area. The goalkeeper is a tall brown haired girl. She looks quite confident but I can notice that she’s nervous. I should also be nervous but somehow I have not had time to understand that yet. I can hear Tilda shouting: – Your the best Vicki! And I know exactly were to put the penalty kick… And then I just do it.

The crowd roars and so do I and my team mates.
WE HAVE ADVANCED IN GOTHIA CUP! 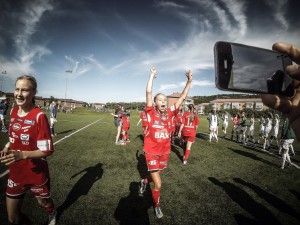