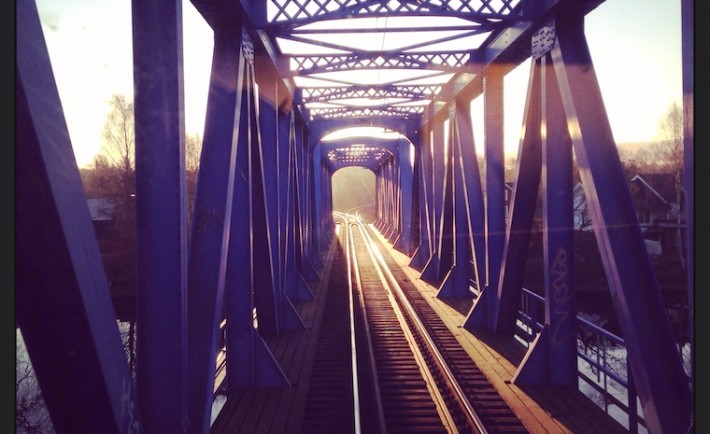 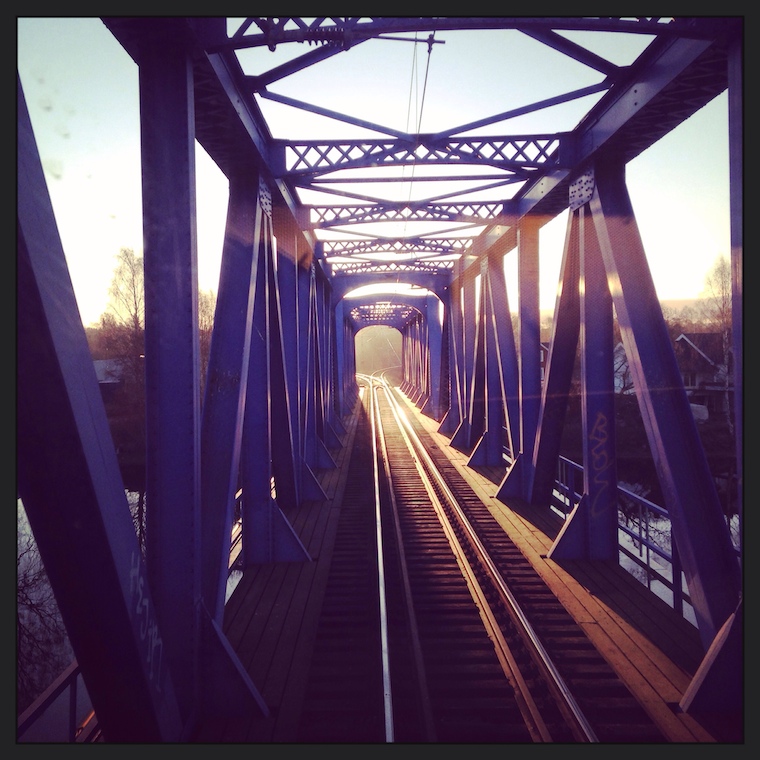 Recently, SJ, a government-owned passenger train operator in Sweden run 2 missions on Foap. Lots of beautiful images were submitted. Today we will though focus on a special photographer, rather than on a photo.

Ladies and gentlemen, meet Jenny or @lokisen who was the first runner up in “Your travel with SJ” mission with the fantastic shot above. The best of all: Jenny is an engine driver. Yes, she drives trains!

We’ve asked Jenny some questions about her photos and her life as an engine driver. Enjoy! =)

Jenny, in this picture that SJ rewarded you for, you caught a lovely feeling of movement. One feels how the trains is moving. Can you tell us more about this image? Was it taken with a cell phone or with a photo camera?

So fun that you like this photo. I took it just after I left the train station in Mora, Dalarna, and would roll over Dalälven. It was an early morning and the sun was just going up. When I got closer to the bridge I saw that it could probably be a nice picture. I snapped quite a lot of photos and I managed to get one that I’m pretty happy with, and that’s the one I sent to the mission. But I had never dreamed that it would come in second place.

This picture was taken with my iPhone 5.

I have been engine driver since 2002. I got into this career by accident. My dream was actually to become a flight attendant so I started like a train attendant and worked with serving onboard the SJ trains around Sweden. But I felt so good onboard the train. Nice colleagues, nice photos, varying tasks and the experience I got with travelling.

Then I realized that it’s pretty fun with technology. When I saw an ad in a newspaper about a Engine Driver Course, I applied. I passed all the tough tests and admissions requirements and in  the Spring of 2001, I began a 15 months long training for engine drivers. I can say I do not regret my choice!

As an engine driver you probably see beautiful things out there. What are the most beautiful stretches you drive? Does it happen that you often have an opportunity to snap a photo?

Yes, I see so many beautiful scenes in nature. I often say that I have the world’s finest view from the world’s best “office.”

Since I am based in Falun, I drive a lot in Dalarna. The stretch between Falun and Borlange is very beautiful near the Lake Runn. Otherwise, my favorite stretch is Leksand going up to Mora Coming down the hill from Tällberg against Rättviksvägen and then seeing Siljan, it’s just so beautiful. I probably take at least one photo from every train that I run. But since I have to be concentrate on driving I just take the pictures. I will only look at then when I get home, that’s only then that I know if I have taken any good photos. Usually it will be one which will be good, but I may just delete a lot of pictures.

SJ will probably be using your picture on their new website. Imagine now that you will see your own photo being used by them! How will you feel about it ? Maybe you’d feel a little proud I guess?

Yes, I think it’s great that they like my picture. And yes, I would feel a little (or maybe much) proud if they choose to use my image. It would be a great fun!

In addition to railroad trips, what else do you like to shoot?

I like to take pictures of the scenery and the surroundings close to where I live. I live in Tällberg, an incredibly beautiful place. So nice views of Lake Siljan. Those who have not been to Tällberg have to visit it, or you can go to my profile and have a look at some photos of our village. Otherwise, I usually take pictures of my animals. I have a ragdoll cat named Polaris. Pictures of her and her blue eyes tend to be really good. My dog ​​Snoopy is also present in my photos.

The reward you got for the photo is a traveler’s check from SJ and tickets for the ABBA museum in Stockholm. Have you already thought about where in Sweden you would like to go to? and how about ABBA museum? Do you like ABBA, by the way? 😉

I’m really excited for the reward. I have wanted to visit the ABBA museum ever since they opened. And now I will visit it later in the summe. ABBA were my big idols when I was growing up. I’ve always listened to their music and listen to them still today.

The traveller’s cheques are enough for a mini vacation, a weekend getaway. Maybe I will go to Malmö/Copenhagen or Gothenburg. We’ll see what happens 😉