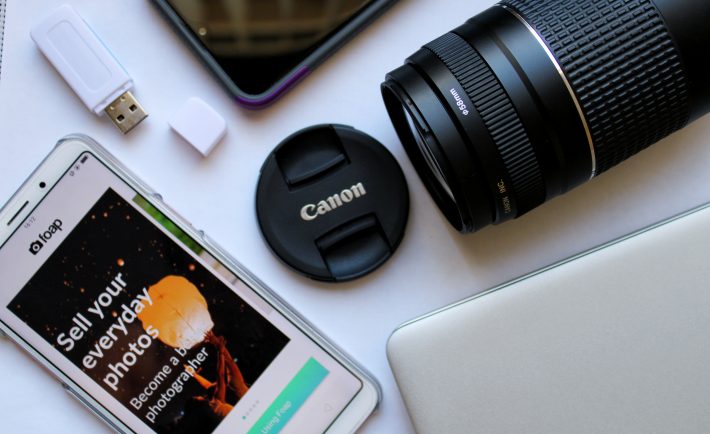 This article was originally posted in the news magazine BostInno.  It’s an interesting study on how real and authentic photos from Foap perform and engage better on social and digital media and then traditional stock photography.

You might have heard about Foap from a photographer buddy, or seen it pop up in funding news. Started in 2012, Foap is a creative spin on the boring idea of stock photography. Through Foap’s iOS or Android app, photographers can upload images taken from their camera or phone to Foap’s library. Then, through Foap.com or the app, buyers can purchase a $10 global license of Foaper’s images. The business model is summed up well in this drawing at Foap’s office in Sweden:

Photographers love attractive models, and this business model should look pretty attractive to anyone with an iPhone gallery full of good shots. When a buyer purchases a $10 license for a photo, $5 goes to Foap and $5 goes to the photographer. That adds up fast for any serious Foap photographers, which is why you can find a lot of articles praising Foap as a get-rich-sorta-quick scheme.

That’s all fine and dandy for photographers, but how good is Foap for the marketers and designers that need stock photos? Where does the $10 value come from? Because I have to be honest: the first time I heard “$10 per picture,” I almost wrote off Foap as an alternative to what I already use for stock photos, Shutterstock. It’s sort of become the necessary evil of digital marketing.

I agree with other marketers when they say “Shutterstock is killing creativity in digital marketing,” but we’re all pretty much stuck in the same boat. Shutterstock’s subscription model is simply the easiest and cheapest option for any organization that needs a lot of stock photos every day. Foap’s $10 per photo structure is a hard sell for organizations like that. Here’s my effort to make that hard sell and explain why Foap stock photos are worth the $10.

First, the value is in the license. Foap calls it “The world’s most attractive photo license,” and here’s the case they make for that claim:

I went and compared the Foap Terms of Service with the Shutterstock Terms of Service, and honestly, they look very similar. Shutterstock does have some strict guidelines on publishing photos at full resolution (to fight against piracy), which Foap’s ToS didn’t have. And I personally found less “Editorial”-only pictures in Foap’s library than in Shutterstock’s. But the difference becomes clear when you see Shutterstock’s pricing structure and different types of licenses.

Here’s the comparison sheet on their site between a “Standard License” and “Enhanced License.” If you’re downloading Shutterstock images through their monthly plans, which most digital markets I know are, you’re only getting the Standard License, and with that comes restrictions on different forms of media. Here’s the rundown of the differences between the Standard and Enhanced licenses:

To get the same unlimited license that Foap offers for $10 on one image, you would have to pay $199. Yes, $199. Check the pricing page for yourself. Shutterstock doesn’t have any option for licensing one picture, you have to start at two. And for the “Enhanced License,” which matches Foap’s license, it’s $199 for two images.

So, if you’re looking to get just one stock image, Foap is about 20 times less expensive. It’s still less expensive if you really need the Enhanced License on all images, too. The subscription pricing that Shutterstock has is almost made meaningless, since the Foap license is “enhanced” from the get-go.

I’ve called Shutterstock “a necessary evil of digital marketing,” but I didn’t really explain that. Well, the problem with Shutterstock’s pricing being so good is that everyone starts using it. If everyone is taking pictures from the same library, there’s going to be a lot of duplicate images across different publications and advertising. Let me show you what I mean with three examples of popular Shutterstock images.

First, there’s this picture of the sky. It’s the first result on Shutterstock for a search for “sky.”

And here’s a Google Images search of the image. Among the results are:

The image shows up on dozens of sites, probably much more than were listed in that Google search. It’s easy to understand why – it’s a generic stock photo from one of the most popular stock photo sites. If you need a picture of a blue sky and green field, that one “does the job.” But if you want your website to stick out, picking the first result for “sky” on Shutterstock might not be the way of doing it. You should check out what Foap has to offer for skies.

And what about content? Nearly every article across every modern news organization nowadays has an image to go along with the headline. Let’s say you’re writing an article about Bitcoin, and you want some photo to put at the top so there’s a fancy thumbnail image when the article gets shared on reddit. You might go to Shutterstock and search for “Bitcoin,” then find this image:

You might want to do a Google Images search for the picture before publishing your article, because you’ll see these articles (and many more):

Digital marketing is becoming more and more about content, and originality is the key value point. If you’re using the same featured image for your article than everyone else, it’ll blend in and get less clicks, less shares, and less value. So, next time you go and take the top search result from Shutterstock, or use Shutterstock in the first place, think again.

Foap introduces itself on its homepage as a service for “engaging social media photos,” and on your first search through Foap’s library you should see what that means. The pictures on Foap look like regular pictures you’d find on someone’s phone…because that’s what they are. The images might not be as high resolution as the ones you’d find on Shutterstock, but they are relatable to anyone that has taken a photo with their smartphone. That relatability translates into social engagement.

I can’t give out too many specific numbers, but in the last few weeks that we’ve been using some Foap images on BostInno, the posts which have had Foap images as the featured image have each done better than usual on social media. Take this post, “Your Guide to Getting Fit as a Young Professional.” It did incredibly well on social media, and I believe the Foap images are what set it apart. But what’s more, one of the Foap photographers found that post and left a nice Thank You for using the picture. This is actually a common practice in the Foap community.

In the Foap community you can find both photographers and marketers, both groups being interested in what makes an image engaging. They can even compete to take the most engaging photo for a brand, something that Foap calls “Missions.” This allows brands to ask for pictures that meet certain guidelines, then give away prizes to the Foapers with the best pictures. Recently, Motorola has been running a Foap Mission and giveaway called “For the Love of Android,” one of a few dozen Missions that global brands have put on. These brands are not only getting some great pictures to use, they’re creating all this engagement around their brand online. And that’s where Foap starts making a lot more sense than Shutterstock: their photos resonate much better on social media.

I’ll end this “Case for Foap” with a rundown of an experiment I did. I was running a Facebook ad for a piece of content about MBA degrees, and I set up three ads with different images. The first image was an unedited Shuttertock imagre, the second was an unedited Foap image, and the third was an “Instragram”-ified version of the foap image that I made with Vintager. Here are the Click Through Rates of the individual ads, using the same targeting and budget:

Based on the image alone, the third ad performed more than two times better than the third. If you work with Facebook Ads or any other paid social media content, you know how much of a difference Click Through Rate can make towards a campaign, in terms of cost and performance. For a Facebook ad that you want to generate 100 clicks, a higher CTR can mean $40 or $50 less in overall spend. That’s where Foap pictures can pay themselves off directly, and that’s probably where you’ll want to start if you’re trying to wean yourself off the boring, cheap stock photos.